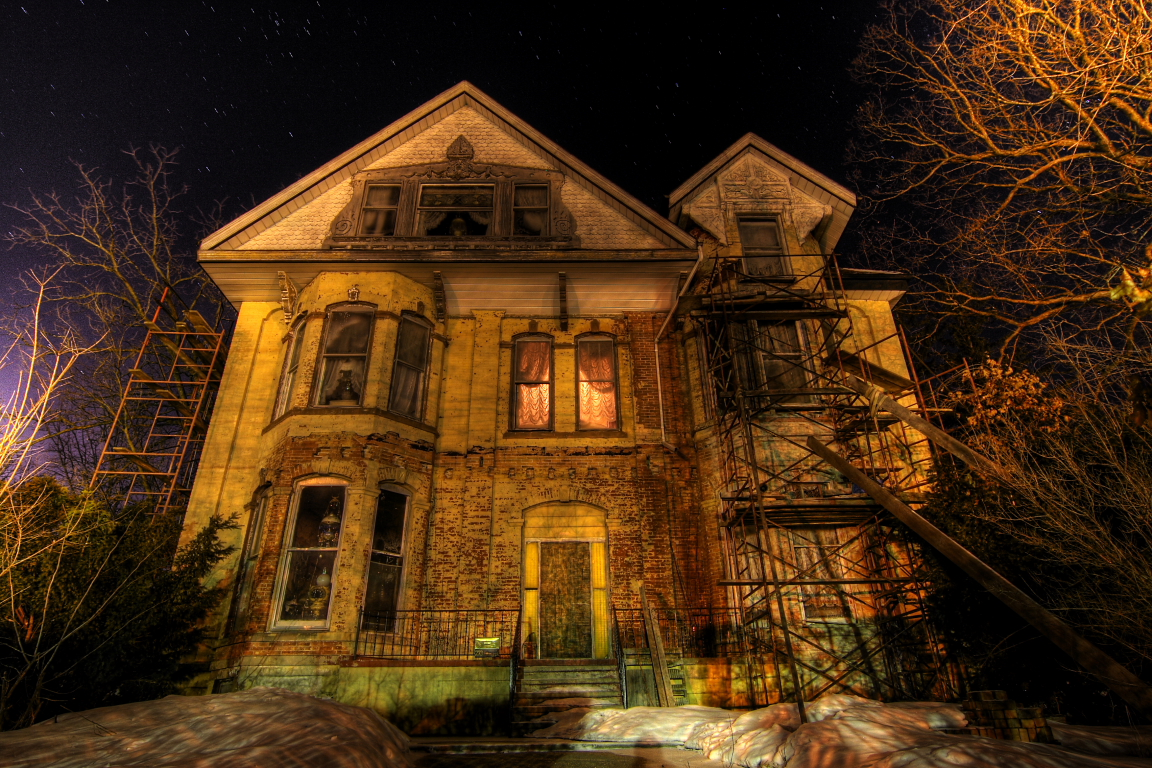 In 2008, I was making my way through a dark, dingy attic in search of what Mrs. Gollen said she heard. She was terrified. Night after night, the creature haunted her. She could never feel safe in her home again, she thought. As I crawled the entire length of her unkept storage area,  my mind reflected back to when I was eight years old – to when I too lived in fear of something misunderstood. Something terrifying and, something with more fiction than anything considered fact.

With no mind on the creature I was searching for and, as Mrs. Gollen made her way out of the house, I thought about the many sleepless nights my young mind pictured horrifying images of the malevolent beings that turned my childhood dreams into nightmares. I remembered the sound of that evil coming. I could still hear the sound of its claws scratching up and down the wall.

Long after my childhood fears and ghosts were forgotten, I moved into the house where my great grandmother, grandmother and grandfather died. During the day the house seemed warm and normal but, at night the house grew cold as my childhood fears returned. Not long after moving in, I noticed a strong musky smell much like death shortly after dark. I began to hear scratching from behind the walls, odd creaky sounds from above the ceiling and saw movement within the shadows. As I sat reading in the evenings, my dogs began growling and barking at the walls ending their protective reaction with a whining all to lay down with their eyes fixated in the direction of something I couldn’t see. Every now and again I could hear what sounded like a child running or playing in the attic. And, just after midnight, you could hear someone (or something) pacing back and forth in the attic. Having lived without my childhood fears for sometime, I began to question what was real again. So, i decided to investigate with an open mind.

My investigation began in the attic where I found the mummified remains of something not human and before i had time to panic I noticed the attic was cold and smelled musky as if something had died in it. There were strange black marks running up and down the walls of the attic – some of these markings were in the shape of crosses. If what i found in the attic wasn’t enough to keep me up at night, in the basement, I found what looked like shallow graves. Next to one of the areas was freshly disturbed earth where something had forced its way out of the ground. To my amazement and relief though what I uncovered was more real than imaginary.

The remains I found were not human, they were of rodents, bats, and birds. The cold I felt was air coming in from a damaged portion of the roof that also became access for birds, bats, and squirrels to enter my home. The cold air dropped to lower levels of the house at night bringing the smell of death and mummified flesh from the attic too. The pacing sound and black marks were from rats moving around. Video footage revealed a squirrel bee lining my attic to a walnut tree in my front yard. (This explained my initial thoughts of a child running or playing.) The scratching behind the walls were mice, and with their sensitive ears, my dogs were reacting to rodent activity all along. In the basement, the shallow graves I found were actually burrows dug out by rats. And it turned out that the freshly disturbed earth resulted from something digging its way out was just a ground hog.

As a pest professional, I have heard many haunting tales of scratching, clawing, and groaning throughout the night all to discover the glowing eyes or infrared image of a rodent during inspection. Pest professionals know that birds and squirrels can mimic paranormal activity in the early evening as they settle in for the night, just as rats and mice can cause vocal, audio, and video disturbances, especially close to midnight since they are nocturnal. Being creatures of habit, rodents typically run back and forth on the same path several times each night debunking the ghost of a child playing or something pacing in my house. Mice will scurry up and down the inside of walls causing dogs and cats to stare and react with excitement. So, before you have another sleepless night, before your kids jump in bed with you from fear, and before you call in the paranormal investigation team look for a few obvious signs first.

Below are the most common signs of rodents causing the unexplained in your home:

Unexplained sounds- Rodents cannot be considered quiet when inside your home. Both rats and mice will cause you to hear squeaks, rustling, and scurrying sounds as they move around. As you go to bed at night noises from rodents begin as they are just now waking up.

Glowing trails- House mice are known for their urination patterns. A mouse will leave an invisible trail of urine that will illuminate under the right lighting that could easily be mistaken for the blood of ghosts. These urine lines may be dashed or spotted in appearance when illuminated by professionals. Other times they may be a short or long unbroken line.

Behind the walls- Rodents build nests from furniture stuffing, shredded paper, grass, and almost anything they can readily find for warmth and cushion. Mice build their nests in undisturbed places like boxes in the attic or basement, unused cabinets and closets, inside walls, even in the voids between ceilings and floors. (Thus hearing noises in areas of no activity.) As mice travel back and forth with nesting material sometimes they drop items. The sound of a twig falling inside a wall can range from a subtle scratching to a traveling scrap-like sound. Over the years, I have found marbles, glass, and other tiny objects in a mouse nest that if dropped during travel could make for an interesting story.

Strange markings- Mice can make it through openings a quarter inch in size. (A reason for markings to suddenly stop or disappear.) Caused by the dirt and oil in their skin and fur, both rats and mice leave behind rub marks (or smears) that can range in color from a light grey for mice to black resulting from rats. On a funnier note: a recent customer of mine had rats in her kitchen. When i pulled the fridge away from the wall there was a well-pronounced smear mark in the form of an upside down cross on the wall left by rats. The cross was the length and width of her refrigerator, and upon seeing the rub mark my customer fainted. After about 30 seconds, she came to and admitted she was shocked to find that the devil was in her kitchen.

Gnaw marks- To ensure proper dental care, both rats and mice gnaw away at things. While wood is a favorite, rodents will begin gnawing away on whatever suits them including electrical wire and PVC pipes. Unexplained grinding, scrapping, and sounds that seem to travel can result from the gnawing of rodents. You may not actually see the gnaw marks, but evidence of rodent gnawing is found in the form of wood shavings, shredded paper, and misplaced items. (The latter resulting from rodents having to escape your presence when a tooth gets stuck on an object.)

The smell of death- House mice have a distinct musky scent that once you smell it you’ll always remember. Like mice, rats too, bring a unique odor to your home. When living inside, rodents will die inside and when this happens you’ll know it. Out of nowhere the smell of death can take up all the airspace inside your house. Lasting more than a week at times, the decaying body of a rodent will surely be cause for concern.

Mysterious patterns- Both rats and mice will leave tracks and tail marks on dusty surfaces. If enough mice are present it will appear as if claws were slid down the top of a dresser or stand that has a dusty top. Rats drag their tails leaving a defined mark between their footprints. Again, in the right type of lighting these trails may play tricks on your mind.

Pet behavior- Remember that cats and dogs are able to detect sounds that humans cannot. Dogs can sniff out bed bugs and more. They are keen on smelling, hearing and seeing rodent activity too. A dog may immediately react to rodents by staring, scratching, barking, whining, going in a circle and pacing near the area of activity.

If your dog is barking or growling at the wall, or just staring up at the ceiling my bet is you have a rodent problem – not ghosts. The haunting truth behind pest control is rodents are the traditional culprit for what goes bump in the night. I have never seen one for myself, and I won’t ever say ghosts don’t exist but, I will recommend calling a pest professional the next time you hear that ghost child playing in the attic.

Why Yellow Jackets Are Aggressive In Fall

Why Are Yellow Jackets More Aggressive In Fall. Once yellow jackets reach maturity, they begin foraging for food. During late summer into early autumn this type of stinging insect begins building nests defending their territory in anticipation for the winter months. This type of insect is much like a bee and wasp. They can be […]